Starting from Vignola cherry, which was put in alcohol in 1945, Toschi was able to widen significantly the range of its products. Today their supply ranges from the different types of fruit in alcohol to the fruit liqueurs.
As a matter of fact Fragolì and Mirtillì are the special liqueurs containing whole fruits, which have been joined by Lemoncello, Verdemela and Sambuca.

Nocino Toschi is one of the company long-standing products. This typical Modena liqueur is made by following an ancient Toschi family’s recipe and the production rules of “Tradizione e sapori di Modena” (Tradition and flavours of Modena).

On the other hand, Nocino with mint, the classic cupule infusion enriched by ice mint, is a product, which managed to combine tradition and innovation.

Fragolì is a sweet liqueur with whole wild strawberries and an alcohol content of 24% by volume.
With its original and intense flavour, Fragolì is a liqueur that can be drunk but also eaten. Thanks to its versatility, it may be enjoyed any time of the day.

Served cold but not chilled, Fragolì is a classical thirst-quenching drink to be enjoyed after a meal. Served at room temperature, instead, it is an excellent choice to enrich the flavour of ice-creams or fruit salads. Combined with Prosecco (a dry bubbly wine) or with sweet bubbly wines, Fragolì also becomes an aperitif. The consumers have always appreciated its versatility.

Lemoncello Toschi is made naturally by steeping natural lemon peel in alcohol, without added preservatives or colouring. It alcohol content is 28% by volume.
Served chilled, it is excellent after a meal, but can also be an ideal ingredient in cocktails and long drinks. Adding tonic water to it, you’ll get a perfect, thirst-quenching aperitif.

Since 2008, it has renewed itself several times, as a result of a refined product restyling. Since 2012 Its alcohol content was reduced from 30% to 28% by volume.
The new slender silhouette of the Lemoncello bottle is similar to that of Fragolì and Mirtillì bottles.

The choice of fruit as the main ingredient is underlined by the choice of label type; a transparent stamp on a bright bottle, with a close-up picture of lemons.
The transparent label also enables to enhance the intense yellow colour of liqueur, the same colour of the best lemons.

In 2009, instead, Lemoncello won the IWSC Silver medal in London.

This is a sweet liqueur with an alcohol content of only 24% by volume, with whole blueberries.
The health-giving properties of blueberries make it as good for you as it is delicious.

With a delicate, fragrant flavour, Nocello is a liqueur made from walnuts and hazelnuts with an alcohol content of 24% by volume.
Ideal served straight, on the rocks or chilled in the freezer. A wonderful addition to espresso coffee and cappuccino, and also as an ingredient in cocktails and long drinks.

A liquer that is native to Modena and one of our company’s historic products.
Toschi Nocino follows all the production rules for products with the “Tradition and Flavours of Modena” label, the umbrella brand created by the Modena Chamber of Commerce to distinguish food products made in the local tradition. Toschi offersthree versions: Classico, aged for over 2 years,Riserva, aged for over 5 years.
The traditional recipe of “Nocino di Modena” would ask for the hulls of fresh walnuts to be harvested the night of St. John, on June 24th. Toschi has been producing the Nocino liqueur since 1945, according to the dictates of the collective mark “Tradizioni e Sapori di Modena” (Traditions and Flavors of Modena).
Made according to an ancient recipe owed by the Toschi family, Nocino is one of the trademark products of the company. Folklore says that on the night of Saint John, which corresponded to the summer solstice, women would disappear in the darkness of the countryside and gather under the walnut tree.
The most expert woman, barefoot, would climb on a ladder and chose the most intact nuts, touch them softly to preserve the dew of the night and place them in a basket.
In the meantime, bonfires would be lighted in the courtyard and the walnut hulls deposited on the ground, on empty jute bags, in order to receive again the night dew, considered the panacea of all evils. The walnut hulls would be then cut in four parts and placed, together with sugar, alcohol and spices, in glass jars exposed to the sun for 40 to 60 days.
To get Nocino di Modena Toschi, the infusion obtained is sagely aged in precious oak barrels for over two years for our Nocino Classico and for over 5 years for the Riserva.
The Nocino di Modena Toschi, with its distinctive bouquet and fragrance as well as intense and unmistakable flavor, is ideal served neat and at room temperature at the end of a meal.
The diffusion of this product and the strong bond with the local territory and traditions, has brought the Nocino Toschi to new serving ways and modern options: on ice during the summer time or hot as a punch during the winter. And for a refined dessert we recommend pouring Nocino Toschi on cream ice creams and gelato. 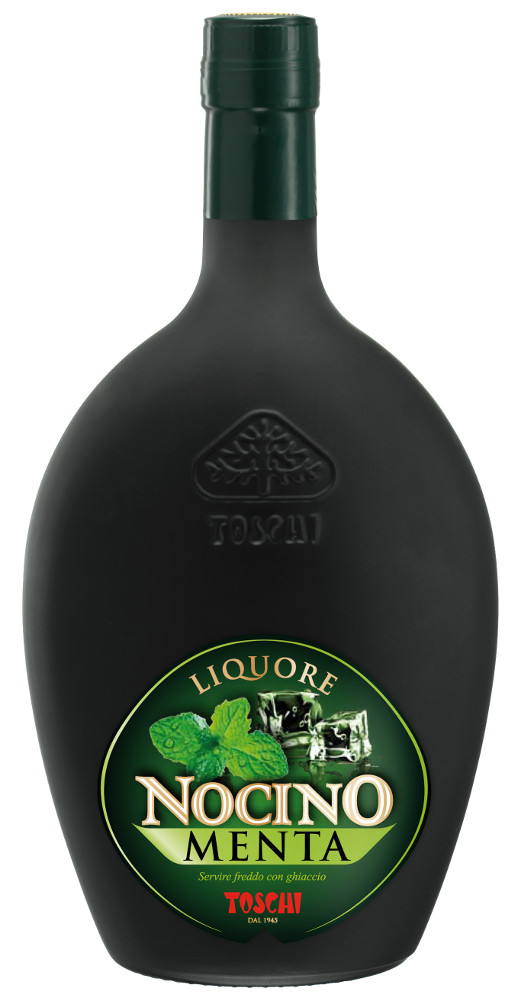 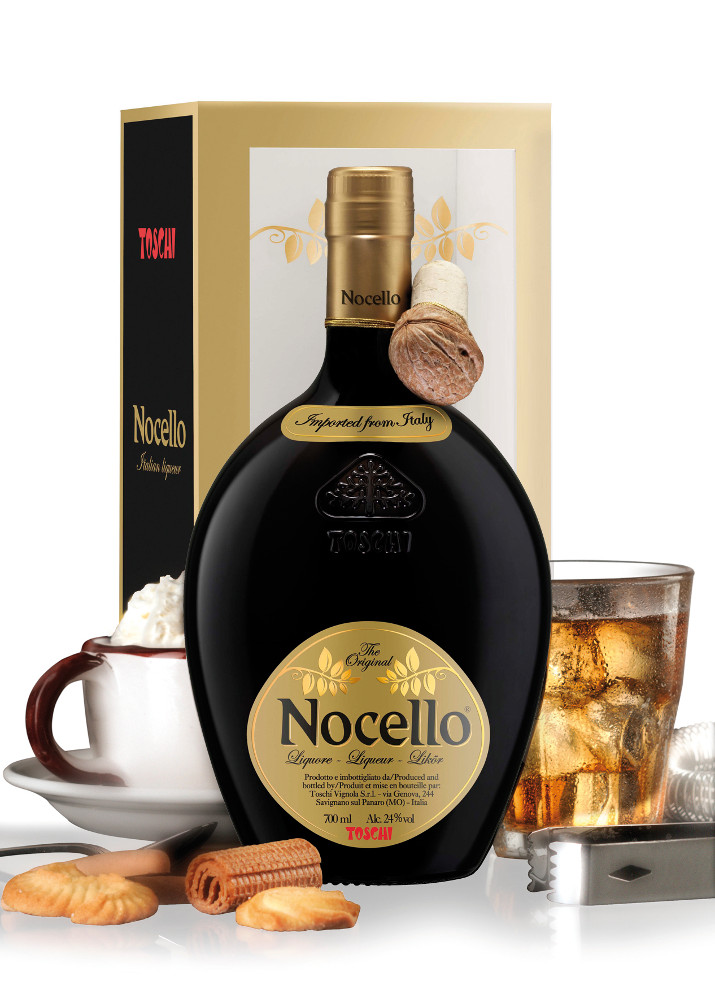